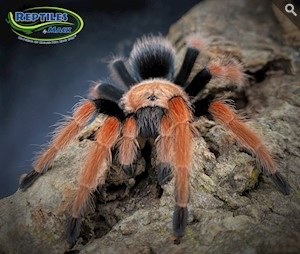 Brachypelma boehmei, commonly known as the Mexican Fireleg, is a New World terrestrial t known for its black abdomen and bright red or orange legs. It is very similar to the Brachypelma hamorii and smithi but with a different pattern on its legs and larger, but similar in appearance to the Aphonopelma bicoloratum. The B. boehmei hails from Mexico in Central America and is known to be found along the Pacific Coast in the Guerrero State and lives mainly in the dry scrub lands. It is a ground dwelling opportunistic borrower meaning it will make its burrow wherever is convenient, including the empty burrows of other animals. This species was described by Schmidt & Klass in 1993 and females can grow to a little over 6.5 in. (17cm)and live as long as 25 years in captivity while the male’s tend to live only 7 or 8 years. The Mexican Fireleg tends to be more more defensive and skittish than other Brachypelma species, which are usually known for being docile. As juveniles and adults, my B. boehmei are quick to kick hairs when annoyed, especially during rehousing, and have been know to quickly bolt a short distance to get away when they feel threatened. The urticating hairs can be very irritating for me, more than some of the other NW species, and can itch for weeks, but your reaction to the setae may be different as we dont all react the same . I suggest using gloves and to take other precautions when rehousing, handling, or cleaning out their enclosures and keep them away from your face and eyes.

The husbandry for this species is the same for most all Brachypelma species. As slings,I keep my Fireleg in a small enclosure at least 3x as long as the tarantulas leg span. I provide at least 2 or 3 inches for them to burrow and moisten a part of the substrate at least once a week. For juveniles, I move them into a 4x4x4 acrylic enclosure with 3in of substrate, a hide, and water dish. As adults, I keep them in a basic terrestrial setup with about 5 or 6” of substrate and more width than height. I keep the substrate dry, provide a water dish and hide, and add some dead leaves, moss and plants to make it look a little more natural. This species natural environment has temperatures that range from 72 degrees to nearly 82 degrees on average but I keep mine at a comfortable room temperature between 70-73 degrees. (Usually right around 70). This species has a slow growth rate and sometimes feels like it is taking forever to molt. I received my first sling around 1/2 in and with in 12 months she was at about 1.5” or more in size. She added about an inch in size every year and mine is currently at about 5 inches. As is common with ts, the older they get, the less often they molt so the slower the growth rate can seem.

As far as feeding, I feed my spiderling over .5” prefilled small crickets or roaches twice a week until the refuse food during pre-molt. As they grow over an inch I provide a small cricket or roach no larger than its abdomen at least twice a week. Once they're juveniles I will feed them 3 or 4 medium crickets at least once a week. And as adults I usually feed 3-5 large crickets, sometimes a few more, at least once every couple of weeks depending on the size of the abdomen.

This species will web up the ground around its burrow lightly to help detect prey, but is not an extensive webber. They make for an amazing display tarantula as they spend a lot of time out of their burrow and have bright colors that contrast nicely and are sure to catch people's eye and a