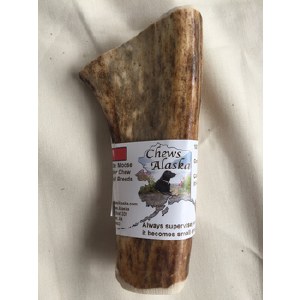 I came to Alaska in 1984 where I landed in a small Eskimo village on the Bering Sea and began my career
teaching. I taught in the same school district for 20 years along the Yukon River. As a passionate outdoorsman,
family man and entrepreneur, I raised my family of 4 children in the villages. Since retiring, I’ve lived in Homer
Alaska, and return to the villages of western Alaska often. In 2013 I started my exploration into the antler
business. Having spent over 30 years traveling the area, I am very familiar with the terrain and the people. I now
transport sleds full of antler through tundra and down frozen rivers in the winter months and by boat during the
spring and fall from various villages along the Yukon River. It is a very unique process. In addition to buying
antlers I spend time each spring with friends and family searching the antler grounds myself as well. Camping for
weeks at a time in search for antlers.
In 2017 I began creating product with my antler in hopes to reduce my need to sell in bulk. I developed the
product line that is now known as Chews Alaska – Dog chews made from Moose antler found only in the remote
areas of Alaska. Due to Chews Alaska, antlers that would’ve once been left to rot in the wilderness provide a
highly valued source of income for the indigenous people of the lower Yukon. Buying and selling over 20,000
pounds of antler each year from this area, I quickly have become known
as “The Antler Man”.
I operate differently then most moose antler chew sellers. Due to the nature of moose antler, I don’t cut them on a
dimensional basis. My antler is bought and sold by the pound. Making antler chews based on weight results in
everyone getting exactly what they pay for, and uniform size consistency in weight.
Due to the different density in antlers its easy to notice a large difference in their foot print.
The smaller antlers in a certain size category are the densest. This is the longest lasting chew, and best for
heavy chewers. The larger and flatter antlers are more porous and can be more easily chewed. These are best
suited for the light chewers or older dogs. The petites are also made from the porous paddle-like parts of the
antlers. Small dogs will more easily chew on these. Chews are made from only Grade A antler. Fresh from the
current year they are a very appealing chew to dogs. In comparing prices of many antler chews I feel that I am
providing a very competitively priced product with outstanding quality.
Although Chews Alaska is operated as a family business, I like to think of this endeavor as a partnership with the
Yupik Eskimos of the Yukon River. We work in harmony to bring what was a wasted natural resource and have it
turned into a valuable commodity that dogs love! A lot of care is taken in choosing the antler that will be properly
cared for and cut into chews.
Chews Alaska
Owned and Operated by Len Fabich
Where I operate my antler buying
in Western Alaska. Red Circle My daughters with a load
of antlers from the
village of Emmonak
Transporting Antlers in
March. Three sleds at a
time
A big Shed Antler in May
Fabich Girls with a
couple big sheds
The native children love to
help out when I load antlers
into my boat.
Clifford Kaganak. Is a very proficient antler
gatherer. Clifford supplements his income
by gathering antlers in the winter. Scammon
Bay Alaska. “Along the Bering Sea Coast”
”
Transporting Antlers in June with my
two daughters Jenna and Delta.
”
Cutting Antlers at the
bandsaw.