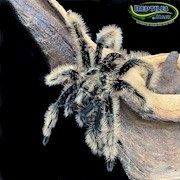 Housing:
A small (5-10 gallon) tank is suitable for Curly Hair Tarantulas. The width of the tank should be two to three times wider than the leg span of the spider wide, and only as tall as the spider's leg span.


2-3 inches of peat moss, soil, or vermiculite can be used as a substrate. Wood, cork bark, or half of a small clay flower pot can be used for a shelter/retreat.

Feeding:
Crickets and other large insects (must be pesticide free), occasional pinky mouse for larger spiders.